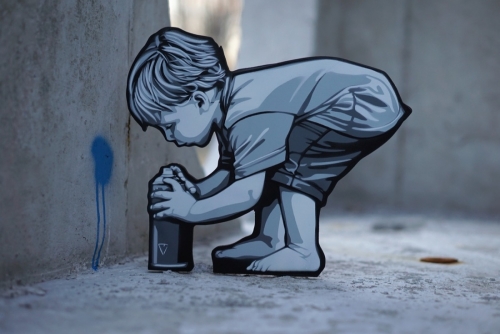 Inspired by the likes of Banksy and Shepard Fairey, Iurato decided to put a novel spin on the stencil template, bringing his painted-wood characters off the wall and into three dimensions. Unlike his street art heroes, he aims for a more scaled-down, intimate experience, intended for the fortunate few passersby who happen upon his creations. They might be found skateboarding on Brooklyn fire hydrant, bundled up under a bridge on the Hudson during a frigid New York winter, tipping a hat on railroad tracks framed by fall foliage, or playing guitar on a lamp post in Sweden.

Born and raised in Cedar Grove, New Jersey, Iurato initially worked anonymously in the early 2000s, but by 2008 he stepped out of obscurity and turned his passion project into a full-time gig. He now shows in galleries, too, but still values the liberation he finds in conceiving and setting a stage in the streets. “It’s often difficult to tell the story in the same way [in a gallery],  because you don’t have the environment to play with,” he says. Even though the scenes he creates outdoors are fleeting, Iurato always documents his handiwork before it disappears. “The photograph,” he explains, “becomes the final piece of artwork.”