Cheryl Hazan Gallery is pleased to present The Space Between Yes and No, a solo exhibition of paintings by Madeline Denaro. This is the artist’s sixth exhibition with the gallery. The show is on view from April 27 through June 4, 2016.

Moving seamlessly between large swaths of color and concentrations of patterns, Denaro’s recent paintings portray a space between stillness and chaos. Her compositions depict floating moments of complexity and amalgamation, built upon atmospheric backgrounds. Layers of paint become reminiscent of collage, portraying moments of transformation and transition between organic forms. Color, as much as the body of the paint itself is used to expand the movement and collision of form. In this selection of recent work, Denaro further develops the masterful manipulation of her materials that has become emblematic of her aesthetic repertoire.

Madeline Denaro was born in the Bronx and currently lives and works in Fort Lauderdale. She has exhibited nationally and abroad for the last 20 years having a solo show at the Museum of Art, Fort Lauderdale and five solo shows in Germany. Denaro is a multiple recipient of the South Florida Consortium Fellowship and has been awarded the State of Florida Enhancement Grant and the Individual Artist Fellowship. 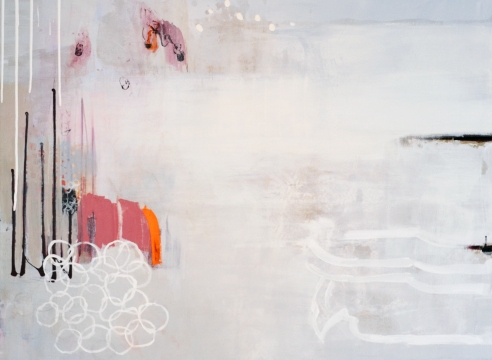