The characters in the Orpheus and Eurydice series evoke the fractures and fissures of the human mind. The various characters illustrate fragmented personalities and reflect upon the creative process of self-inquiry. Throughout the two figure series, Yoshida contemplates his central theme of self inquiry and subsequent discovery. This introspective process involves reassembling aspects of the self into a unified whole, paralleling the classical creative process.

As the long time art director of the peerless American textile firm, Clarence House, Kazumi Yoshida has created a signature style of figuring ease and naturalism into contemporary pieces. The artist’s distinct aesthetic has also been notably realized in textile, Kazumi has created Hermès luxury items in partnership with the esteemed French brand for several years. His paintings and sculptures have been included in numerous shows throughout the United States, Europe, and Japan. His work has been featured in many publications including Vanity Fair, Interior Design, House & Garden, Traditional Home. 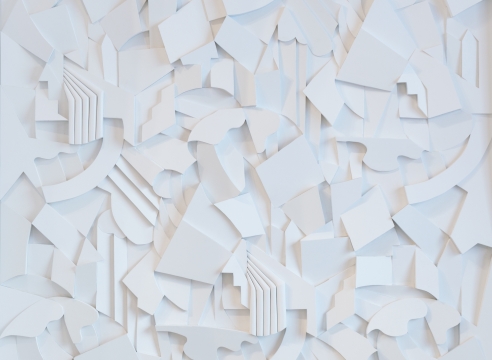