Karim Ghidinelli, "In the End there is only one FeelingI", enamel and engraving on aluminum, 96 x 46 inches

Happy But Guilty, Enamel and engraving on aluminum, 72 x 60 inches

Self Preservation, Enamel and engraving on aluminum, 72 x 60 inches

Karim Ghidinelli was born in Brescia, Italy. After growing up traveling throughout Europe and Africa often, Karim moved to London, England in 1995 to attend the Chelsea College of Art and Design. The artist’s next move was to Savannah, Georgia where he completed his undergraduate and graduate studies in painting. Karim has since moved to Miami and now lives and works in upstate New York.

Karim’s work is based upon passage, mark, and assurance. Identity is naturally a part of the evolutionary process of the passage; the mark is embodied by his distinctive trace on the page. As his work documents the passage of others, it simultaneously assures the artist of his own journey.

The mutation from print, to portrait, to metal, oil or collage represents the myriad of influences Karim draws upon when composing his thoughts. Being the living testament of an eclectic path, it is impossible for him to ignore the possibilities that surround him.

Karim’s work needs to achieve a political identity and needs to express its provenance or dissidence, as life constantly reminds us of the inevitability of politics. The piece is never concluded; rather it symbolizes the continuation of a phase, from himself to the public, from his interpretation to the audience’s. Through its exposure the work obtains necessary nutrients, indispensable for further creation and maintaining the link. 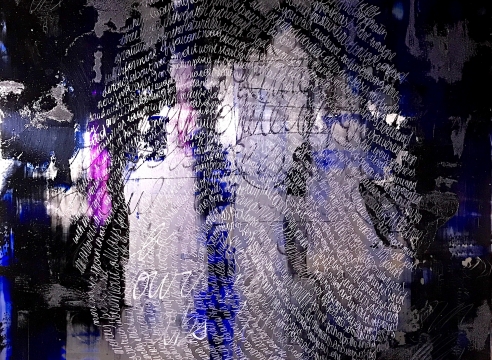